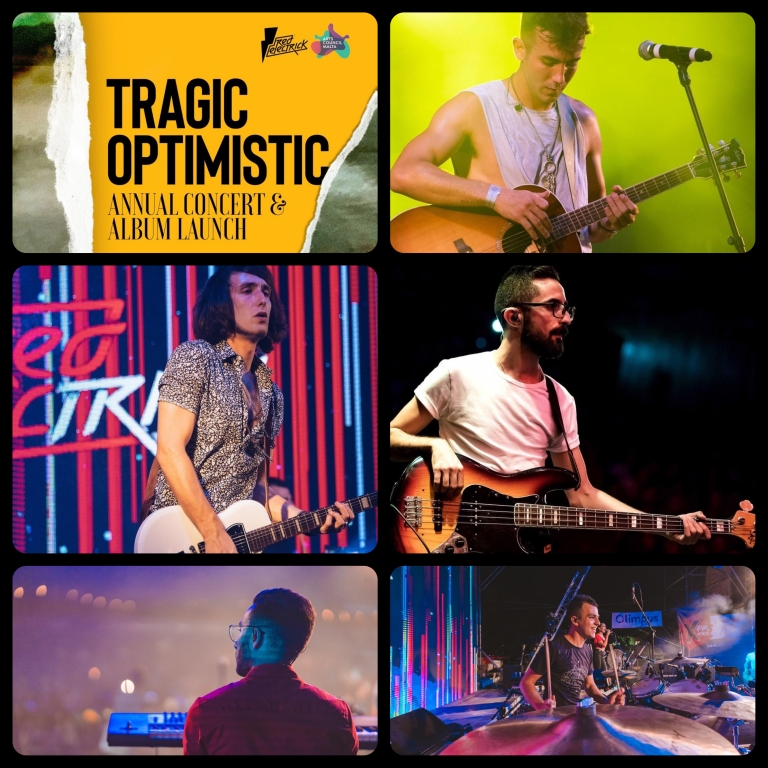 Red Electrick have been on the scene for over ten years now and with three albums to their name ‘Vine Lady’, ‘The unplugged sessions’ and ‘Inside you’ now comes their fourth, which is the first with the charismatic Joe Roscoe as front man, bearing the name of ‘Tragic Optimistic’.

The past 2 years for Joe,Peter,Ivan,Ale and Rob have been 2 of the busiest since the band’s inception. They’ve released 3 singles along with music videos-of which all 3 were major hits on the radio airwaves and dominated the local charts, performed at key national events all over Malta and Gozo, performed in Los Angeles, Spain and UK and have also been invited to songwriting camps in the U.K and in L.A.

and 2019 saw the launch of their brand new collaboration ‘ONE’ with The Travellers. ‘ONE’ was an event which saw an attendance of over 3,000 people,was a first for the local music scene and has been nominated as ‘Best Collaboration‘ at this years’ Lovin’ Music Awards.

‘Tragic Optimistic’ will feature their 3 latest hits ‘Right Here’, ‘G.O.R.G.E.O.U.S ‘ and ‘New Day’ along with ten other tracks which will make you come alive from the very first listen. The album will be launched at Red Electrick’s annual concert which will this year be held on the 9th of November at the soon to be opened new venue WH21 in Paola.

If their previous concerts are anything to go by, then make no mistake this will be another sold out show that you do not want to miss out on .This year the set up will feature a 360 degree revolving stage which will make the concert even more special.

So instead of sitting and wondering why you didn’t manage to find any tickets because you played the dangerous game of waiting and tickets were all of a sudden sold out. Make sure to get your tickets from Shows Happening as tickets are already selling fast. There are only around 300 tickets left.

Get ready to dive into the music and be electrified by one of Malta’s best live acts.

Red Electrick will also be performing at the Lovin’ Music Awards on the 19th of October and are nominated for the following awards;

Whilst Rek’s own Peter Borg is nominated for ‘Best Producer‘ for his work with various artists ranging from Kevin Paul, Danika and Oxygyn to Luke Chappell and Michela Agius.

To stay tuned on everything to do with the guys from REK, be sure to follow their official social media pages;